Great Wall Motors is going upmarket, recently, first named the new car the Haval Big Dog, and then gave birth to a White Cat. The day before yesterday, it released Lemon (a new vehicle platform positioned in small vehicles), Tank (vehicle platform for off-road), and Coffee Smart (GMW’s intelligent vehicle brand). Now, as the first hard-core off-road vehicle of the WEY brand, WEY P01 was officially named Tank 300 and made its debut at the Chengdu Auto Show.

Tank 300 is the first compact SUV in the “Tank · WEY” series, its exterior design does not adopt the design language of the previous VV series, the square, and right-angle design makes it looks rough. The tank 300 adopts a two-color body, the front face is covered with dark decorative parts, and the design of round lights + square face is also applied to the Haval Big dog.

It’s just that Tank 300’s headlights have an extra LED daytime running light that runs through the front, which makes the entire front face look in line with contemporary aesthetics while exuding a retro atmosphere.

The expanded wheel eyebrows make the Tank 300 highlight the roughness of the vehicle. The overall square box body design is somewhat similar to the Jeep Wrangler.

The interior of Tank 300 also adopts a two-color design, and the air-conditioning outlet is dotted with orange elements and the appearance echoes each other. At the same time, the size of the LCD instrument and the central control touch screen are both 12.3 inches, which improves the daily experience of this hardcore SUV.

At present, WEY has not announced the power information of Tank 300, but it is known that it will be equipped with three differential locks, and with 9 driving modes. 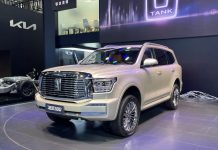