03 is the first sedan of Lynk & Co, the overall design has a strong sporting temperament. Lynk & Co 03+ continues to strengthen its sports genes in terms of performance. The new car adds a sporty body kits, including carbon fiber front lip, front grille, all-new 19-inch two-color spoke rim, rear bottom diffuser, carbon fiber rear spoiler, and bilateral four-out exhaust, 03+ is equipped with side skirts, a “+” badge is added at the C-pillar position, which enhances the sense of movement. In addition, the color around the window, the mirror housing and the door handle are all black. Body size of 03+ are 4677 (4692) / 1840/1461 mm and the wheelbase is 2730 mm, much similar to the 03.

Lynk & Co 03+ is also optimized for the aero kit, anyway the drag coefficient of the vehicle is basically the same, but downward force is increased from 11kg to 40kg at maximum speed, it can greatly improve the stability and performance.

With the optional aero kit and large rear spoiler, the downforce of Lynk & Co 03+ at maximum speed is increased from 11kg to 40kg at max. speed, greatly improving the handling stability at high speeds. It is worth mentioning that the above optional configurations can be individually selected without bundling.

The “naked” Lynk & Co 03+ has almost the same appearance as Lynk & Co 03 if the optional kits are not installed, the only difference is the black A/B pillar and the roof, 18-inch five-spoke two-color rim and the bilateral four-out exhaust, the size and shape of the rear spoiler and bottom diffuser are also slightly different.

The interior of Lynk & Co 03+ continues the layout of Lynk & Co 03, but the high contrast color scheme brings stronger visual impact. In terms of configuration, in addition to the original the full LCD instrument panel, central control large screen, electronic gear, electronic handbrake, 03+ also features electric adjustable integrated sports seats, and it can be equipped with sports cockpit that wrapped by large area of Alcantara material.

In terms of power, Lynk & Co 03+ is powered by Geely JLH-4G20TDC/Volvo B4204T23 2.0T inline four-cylinder engine, this engine is also used by all Volvo T5 models, its maximum power is 250 hp and peak torque of 350 N.m, the transmission system matches the 8-speed AMT transmission and the BorgWarner intelligent four-wheel drive system. In terms of performance, the 0-100km/h acceleration time of Lynk & Co 03+ is 5.9 seconds, while the brake distance of 100-0 km/h is 34m. 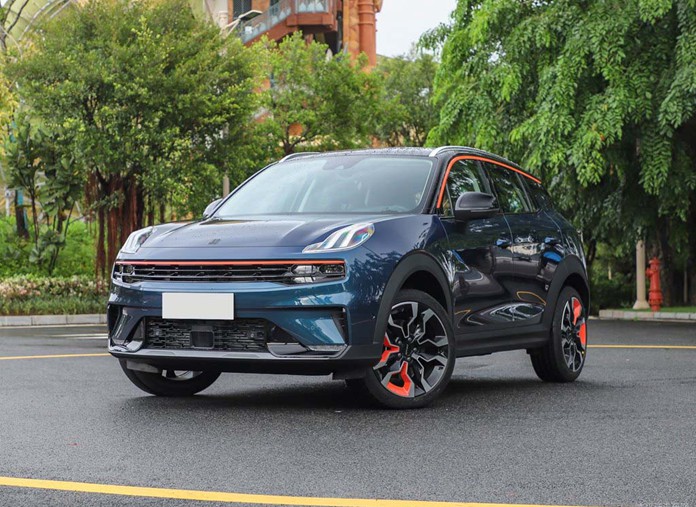