BYD F0’s interior design is simple, the overall tone is dark, it would be boring if stay to long in it. From the view of modeling, it still draws in the whole Toyota AYGO design style, and it has also injected some new elements in some parts such as the center console, such as the YARIS. However, it combines very well ,there is no trace of rote.

As the same of its appearance, BYD F0’s internal process has also been significantly improved. Defective wools can be hardly found out from BYD F0 which would happen in other same level car in the past, but also has well-balanced gap. F0’s steering wheel uses polyurethane materials, the surface is very soft. 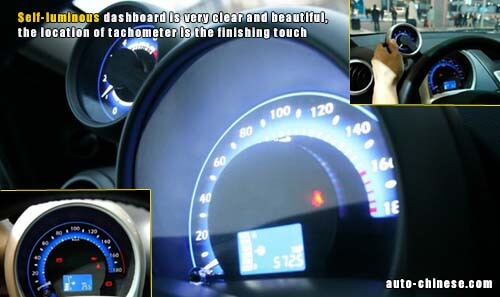 The dashboard behind the steering wheel is very cute, style is like MINI, of course, its design also comes from AYGO. As it adopts self-luminous design, so texture is better than other same level car. The left smaller one is the tachometer, the bigger one is speedometer, the style is sweet, but the plastic feel is quite strong.

Many indicators such as fuel gauge are in the middle of speed meter. It displays the margin of the fuel through the six white grids on LCD screen, very intuitive. However, we also found some problems while using: Since this liquid LCD display is completely an analog form, it’s not like the traditional instruments, it won’t shows directly how much gas is remained but  suddenly shows it’s going to be out of gas, and made it unaware unprepared, so it needs to gradually explore the use of its laws. In early use, especially long distances travel, as much as possible to keep more than three cells.