Once again, a new Chinese EV maker ICONIQ Motors(Chinese say “艾康尼克”) released its first EV model: ICONIQ SEVEN II at 2019 Shanghai Auto Show, Actually the prototype of ICONIQ SEVEN II was first unveiled in 2017, the former name is ICONIQ SEVEN, this time, the upgraded version ICONIQ SEVEN II comes to the mass production version. Earlier, the official announced that the car will be delivered in 2019.

ICONIQ SEVEN II is the first model from ICONIQ Motors, which is officially defined as the electric SPV (Smart Passenger Vehicle). Focusing on the passenger experience, the car is designed to provide high-end travel customers with the ultimate mobile travel experience that combines comfort, entertainment and office functionality. In fact, it is a luxury MPV that emphasizes intelligence and space experience.

In terms of appearance, ICONIQ SEVEN II offers eight colors, and the two colors are combined in four combinations. In terms of body size, the new car has a length, width and height of 5170/1930/1830 mm and a wheelbase of 3,100 mm. Compared to the first generation ICONIQ SEVEN, the ICONIQ SEVEN II has been extended by 200mm to 3100mm and has been widened by 100mm to make it more spacious. Changes in interior and roof design, more seating features and comfort also provide ICONIQ SEVEN II with a better space and passenger experience.

The ICONIQ SEVEN prototype offers three variants: MOBILITY version, PREMIUM version and VIP version. Among them, MOBILITY is 7-seat basic version, PREMIUM is 6-seat version, and VIP is 4-seat luxury version. The VIP version has an internal layout with two independent president seats and a 37-inch LED screen. The Premium Edition is a six-seat SPV smart car that provides high-end quality and practical driving experience for both business and home.

Official claimed ICONIQ SEVEN II will be equipped with a motor with a maximum power of 165 kW and a cruising range will be longer than 400km, meeting the national standard five-star collision standard (planned to meet the 2021 EU five-star collision regulations). At present, the official has not yet disclosed the list time and price information.

The interesting is that the overall design of ICONIQ SEVEN came from W Motors, the manufacturer that made the Lykan super-run. The engineering and technical support for this car comes from Magna and Turin Studios, Italy, the Internet system is from Microsoft, and the investment strategy partner is Ping An China.

Although ICONIQ SEVEN has not yet been listed, and there is no pre-sale price announced, the car has received nearly 10,000 orders from the Middle East, a large part of which comes from the Abu Dhabi police. This China-made MPV designed by W Motors is still very popular overseas.

Founded in 2014, ICONIQ Motors was founded by the founder of W Motors Mr. Wu Nan and Ralph Debbas. Headquartered in Tianjin China, it currently has branches in Beijing and Shanghai. Based on the successful experience accumulated in the process of creating W Motors, Mr. Wu Nan led the team that successfully built Lykan Hypersport back to China. This internationally renowned team includes many international car master from Magna and Turin studios Italy. ICONIQ Motors commit to developing pure electric vehicles that focus on the passenger experience.

At the 2019 Shanghai Auto Show, president Wu Nan announced at the press conference that ICONIQ Motors received strong support from the Tianjin Municipal Government and jointly with Tianjin government created a new company in Tianjin. The factory of ICONIQ Motors is located in Zhaoqing, Guangdong Province. it will invest 16 billion yuan in the production and research and development of new energy vehicles in the coming five years.

ICONIQ Motors also announced Dr. Bi Fukang (Dr. Carsten Breitfeld, German who has a Chinese name “毕福康”) joined ICONIQ as CEO on 2019 Shanghai Auto Show, who has more than 20 years of experience in the automotive industry, he has held several senior management positions in chassis development, transmission system development, and product strategy BMW i8 project director during his 20-year career in BMW. Dr. Bi Fukang was the CEO, Chairman and co-founder of BYTON Auto, which is also a new EV maker in China. 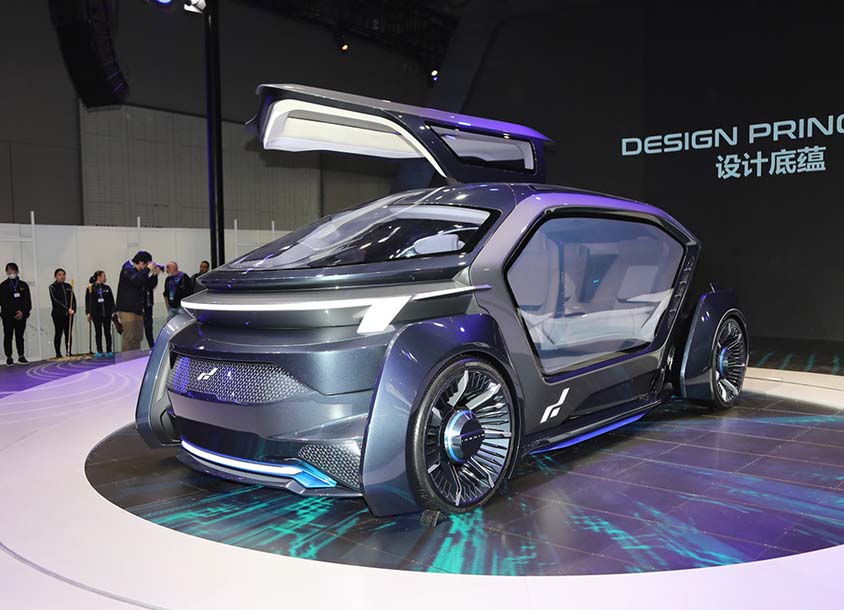