Riich G5‘s interior design concept is as same as its appearance, it doesn’t strive to be unique, but to emphasize on stylish and graceful interior trim. Horizontal and straight line are the mail keynote of the dashboard, dark gray mixing with off-white can be easily accepted by public, the standard version configures with fake decorative metallic article,the mahogany decoration are used on the advanced version. The whole cabin is luxury and fashion, but it can’t be associated with the word “sporty”.

The interior workmanship and materials once again show Chery‘s progress, but take a closer look at the interior joints density between plates, they have not been reached in the impeccable level. 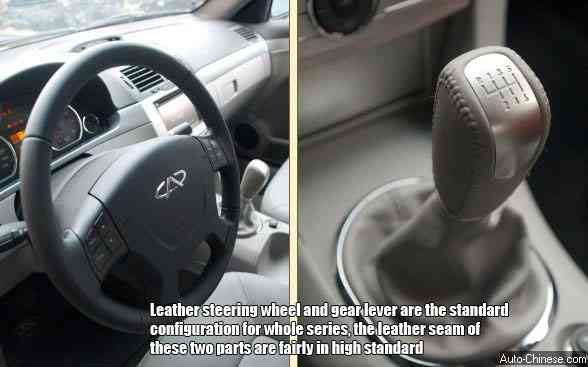 Leather steering wheel and gear lever are the standard configuration for whole series, the leather seam of these two parts are fairly in high standard, unfortunately both the shape and handle feeling lack of sporty sense.

The driver’s door panel seems to have met before – Oh yes, it almost copies from Audi’s design, it is both good in functionality and perception, but the texture on the button can not be compared with Audi; While the Logo “Riich” are all over its exterior body, the middle part of the steering wheel marks the Logo “Chery” where we have to face it all the time, it’s really confused us.

The style of handbrake is one of the few bold ideas, it is pretty smooth in real use, nothing but the way of holding should be changed from the traditional “vertical hold” to “horizontally.”

Instrument panel layout is not fancy, there is a high precision LCD display in central, it can display a variety of information, it looks rather in high grade.

Silver center console coupled with a large area of black background color, with a fashion sense. Buttons are large enough for all kind of clear identification, but silver buttons coupled with white text is not easy to see in broad daylight. Instead there is no such a problem in night because backlight is available.

Single disc DVD and original gyroscope-based navigation system are the configurations of its top model, unfortunately, navigation system of test drive car has not yet activated, so we can not know if it is easy to use. Dual-zone automatic climate control air-co is the standard configuration for whole series, it carries with dust filter function, control panel is easy and clear to use.
[amzn_multi_product_inline keyword=’mount’ count=’4′ page=” sort=” category=’Automotive’]