The only once we access Roewe 350 before we experience is on March 17th 2010 in SAIC Nanjing Pukou production base where Roewe 350 was rolling off, however, it had never showed its real face from then on, this time we finally have the chance to know more about its exterior and interior. Also, Roewe 350 is on Beijing Auto Show now and to be the official list, more people can have the opportunity to take a look at its real face.

SAIC did not arrange the test drive model, mainly based on static display. Despite being a compact class car, Roewe 350‘s new look and rich configuration is still worth mentioning.

Appearance is positioned on globalization style, as the first compact-class, Roewe 350 still inherited some of the design genes from Roewe family’s two brothers 550 and 750. The reasonable proportion shape, smooth curve’s through the body, magnificent and elegant in the meticulous details.

With the Flying-V Brand gene, the front face looks full and stretch. The wingspan style shape in the grille seems it is positive and progressive attitude, “falcon eyes” headlight shape is very sharp and somewhat brings a little bit breathtaking heroic spirit. And some use of chrome parts make the grille fashionable.

Bumper beam with a single span of grille make up the the horizontal vision of front face, we can see there is no network structure under the intake, so it can be directly blown into the air tank to reduce water tank temperature while driving.

The curve line on the roof look smooth which is much different against its tough beltline, the fusiform shaped front face can effectively reduce wind resistance, full curve of roof can provide better headroom for passengers.

205/55 R16 tires is standard configraution, without a test drive, we do not know what kind of feeling would this pair of shoes may show us, but the Maxxis MA656 tire is the type which was practiced by all kinds of tracks, I believe that there will be a good sport performance to match with it. Five-spoke wheel style is not a significant new idea.

Continued low-profile of its front face, Roewe 350‘s tail is not exaggerated either, the chrome trim on the luggage compartment’s door is a highlight point, echoing each other with the front face style. The internal structure of transparent red taillight is not complicated, it’s converted with its tail. 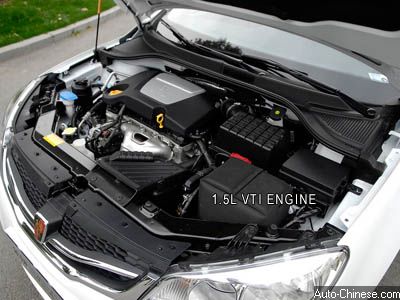 The 350D plate on tail shows that this is high configuration model of Roewe 350, other models are 350S and 350C, only difference is the configuration, power are all used 1.5L VTi engine. According to the factory staff’s instruction, Roewe 350‘s engine is with silent chain drive, so the engine noise control is better than the other models, but it still need our drive test.

SAIC Announces an upgraded Roewe RX5 PLUS in China