On the morning of October 8, the first batch of 200 electric vehicles under SERES brand exported to Germany held a launch ceremony. The batch of SERES’ 3 models will arrive in the German market in one month by sea.

SERES is a major new energy vehicle brand under SOKON. It is understood that the SERES brand originated from SF Motors, a new energy company registered and established by SOKON Group in Silicon Valley in the United States; in 2018, the company announced that the brand was named “Golden Fruit EV” in Chinese, and later changed its name to “SERES” (Chinese: “赛力斯”). The current model sold by SERES is SERES SF5

Zhang Xinghai, founder and chairman of SOKON Group, said that in the past three years, SOKON has invested more than 10 billion yuan in the development of smart electric vehicles and launched the smart electric vehicle products SERES SF5 and SERES 3. In the first half of the year, SOKON’s commercial vehicles made major breakthroughs in Turkey, Morocco, Pakistan, Ecuador and other markets, and the passenger vehicle Dongfeng Fengguang ix5 also entered the European market.

It is not difficult to see that electrification and export will be the strategic development goals of SOKON. In April this year, the first batch of Dongfeng Fengguang ix5 were exported to Germany. The export of SERES brand of smart electric vehicles also marks that SOKON have fully entered the European market in three series of commercial vehicles, passenger vehicles and electric vehicles. 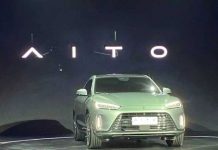